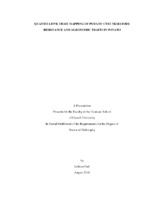 This research sought to map and track genes that control three important potato traits: resistance to potato cyst nematodes, tuber specific gravity, and chip color out of cold storage. The golden and white potato cyst nematodes (Globodera rostochiensis and G. pallida, respectively) are devastating quarantine pests of potatoes. The most widely distributed pathotype of the golden nematode, Ro1, is well controlled by the H1 resistance gene. In chapter 1, two molecular markers linked to H1, 57R, and TG689, were evaluated for their ability to identify resistance against Ro1 among 38 cultivars and 350 New York breeding clones. The ability of either marker to predict resistance was high – 99.7% and 98.3% for 57R and TG689, respectively – demonstrating that either of these markers is sufficient to make selection decisions in a practical breeding program. Chapter 2 reports on a QTL analysis to map resistance against pathotype Ro2. This pathotype overcomes the H1 gene and is currently present on several farms in New York State. Two autotetraploid clones – NY121 (Ro2 resistant) and NY115 (susceptible) – along with 182 F1 offspring were genotyped with 8303 SNP markers and evaluated for resistance using a greenhouse pot assay. Analysis with TetraploidSNPMap identified two resistance QTL on chromosome 5: one was located at 26 cM and explained 24% of the variation for resistance, while the second at 59 cM co-localized with the H1 gene and explained 13% of the variation. Subsequent inoculation with G. pallida revealed that the locus at 26 cM also conferred resistance against pathotype Pa2/3, explaining 9.2% of the variation. Chapter 3 reports the mapping of chip color and specific gravity QTL in the same NY121 x NY115 cross. NY115 has often been used as a parent because it transfers exceptionally light chip color to many progeny. Significant QTLs for chip color were detected across multiple years on chromosomes 3, 4, and 7, with the QTL on chromosome 7 explaining the most variation (13.3% across four years). Significant QTL for specific gravity were repeatedly detected on chromosomes 2, 3, 4, 5, 8, with the QTL on chromosome 4 explaining the most variation (10.5%).