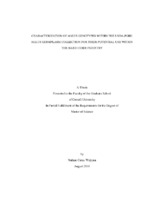 In the United States, hard cider producers lack access to apple genotypes (Malus ×domestica Borkh. and other Malus species) that possess higher concentrations of tannins (polyphenols that taste bitter and/or astringent) and acidity (described as having a sharp taste) than what is typically found in culinary apples. Utilizing the USDA-PGRU Malus germplasm collection, two projects were conducted to address these concerns. The first project characterized fruit quality and juice chemistry for a target population of 308 accessions with the goal of identifying accessions with desirable characteristics for hard cider production. The second project used the same sample population to explore the use of the Ma1 and Q8 genes as potential markers to predict the concentration of titratable acidity of cider apples. An initial target population of 308 accessions were identified and 158 accessions were assessed in 2017 for external and internal fruit characteristics along with juice chemistry. As per the Long Ashton Research Station (LARS) cider apple classification system where apples with tannin concentration (measured with the Löwenthal Permanganate Titration method) greater than 2.0 g•L-1 are classified as bitter, and those with a malic acid concentration greater than 4.5 g•L-1 are classified as sharp, 29% of the 158 accessions would be classified as bittersweet, 13% bittersharp, 28% sweet (neither bitter nor sharp), and 30% sharp. In addition, the polyphenol composition of 14 genotypes was measured using ultra high-performance liquid chromatography. and indicated that the variation in polyphenol levels measured by the Folin-Ciocalteu assay was largely due to procyanidins and phloretin compounds. In Chapter 3, the accessions phenotyped in the 2017 harvest season were also genotyped for the Ma1 and Q8 genes and fit to a linear model where measured titratable acidity was the response variable and the Ma, Q8 and combined Ma1 and Q8 genotypes were used as predictor variables in two separate models. An ANOVA indicates that the Ma1 gene was found to be a reliable predictor of fruit titratable acidity (P = < 0.0001), but the Q8 gene was not (P = 0.48). Combining both genes in the analysis was not a better predictor than using the Ma1 gene alone (P = 0.27). From there an estimated marginal means model, was able to demonstrate a series of non-overlapping 99% confidence intervals for the means titratable acidity concentrations of each Ma1 allele. Additionally, an estimated marginal means test of the Ma1 alleles was able to accurately predict the acidity classification as per the 4.5 g•L-1 threshold for the LARS cider apple classification system. Thus, a gene-based classification system of cider apples is proposed, with the titratable acidity levels defined by the Ma1 allele thresholds of 5.26 and 7.82 g•L-1. The advantage of a genetically based classification system is that it could be used for marker assisted breeding and it would not be subject to horticultural, seasonal, or geographic variability. Together, these two projects defined procedures for rapid phenotyping and genotyping of germplasm collections for addressing the needs of the emerging hard cider industry. Additionally, the characterization of cider apples for juice quality identified 49 bittersweet and 21 bittersharp genotypes that should be further evaluated for their suitability to perform in commercial orchards.