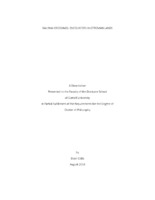 Railway Crossings: Encounters in Ottoman Lands focuses on the production of railway spaces in western Anatolia during the second half of the 19th century, with an emphasis on how spatial practices were altered with the advent of railways in the region. Understanding the railroads as a cultural as well as a material phenomenon, this work approaches the western Anatolian railways through a series of interdisciplinary vignettes that juxtapose the histories of the built environment with histories of technology, archaeology, travel, and the senses. In an effort to modernize its transportation infrastructure, the Ottoman government granted the first railway concessions in Anatolia to two British companies. The Izmir-Aydın and Izmir-Kasaba lines connected the port city of Izmir to the fertile river valleys of the Gediz, Küçük and Büyük Menderes rivers. The construction of railways was an intensely material act, requiring not only the laying of tracks and the construction of station buildings, but the alteration of a whole landscape. Beyond this physicality, the railroads were harbingers of new modes of interaction with space. They altered the commercial transportation networks of the region that had depended for centuries on camel caravans traveling along well-established but flexible pathways. People also found a new mobility in the train. In addition to the thousands of local inhabitants of the region, masses of tourists arrived to partake in the ready access to some of the best known ancient and Biblical places of archaeological significance. The railways incited new archaeological explorations that expanded knowledge, and facilitated the acquisition of antiquities for museums, private collections and even as construction materials. Additionally, railroads brought with them novel sensory perceptions. From the moment when the first locomotive whistle was heard in Izmir to the illumination of the night with a thousand flickering lights in the celebration of Sultan Abdulaziz's visit to the city and its railway, a new and industrial sensorium was woven onto the existing sensory geography of the region. Thus, through such explorations, this dissertation foregrounds how the experiences of space were altered with the advent of railways in western Anatolia.