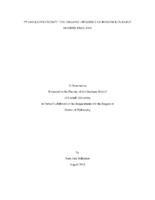 This dissertation examines the persistence of romance in early modern England. An ancient literary genre defined by its magical and wondrous themes, romance became increasingly discredited with the rise of Protestant attacks on superstition. The new science of Francis Bacon and his successors also attacked the core subject matter of the romance genre. Despite these developments, romance persisted in early modern England both as a genre and as a formal principle. This formal principle of romance expressed itself in opulent literary style, which Bacon famously decried as "Pygmalion's frenzy," as well as in the formation of knowledge from everyday organic phenomena. I connect this formal principle of romance to the nurture of magic and Aristotelian science in texts that sought to discredit them. In these ways, romance became an opulent repository of lapsed forms from which poets and scientists drew. This dissertation focuses on four organic phenomena and their fabulous history in early modern England. In Chapter 1, I show how crystals, the "clear and pellucid" mediums of Newtonian optics, had a far earthier history that emphasized the fact that they grow in the soil and are prone to breakage. Romance helps us understand how these aspects of crystals yielded useful knowledge, just as their Newtonian clarity did. In Chapter 2, I discuss the literary and scientific reception of another "clarifying" organism: the mythical herb moly, which Homer's Ulysses uses to resist Circe's enchantments in The Odyssey. This chapter examines how the afterlife of moly showcases the vegetable power of the original myth in which it was fostered. In Chapter 3, I I discuss how enticing food and succulent language alike were targets for early modern attacks on idolatry. These attacks, however, often ended up reaffirming the value of the knowledge to be gained from eating. Chapter 4 studies how roses became historically knowing icons in both literary texts and experimental science. The iconicity of roses endowed texts with visual opulence and supersitious content. In sum, romance may have survived in early modern England because of its persistent affinities with the organic realm.