Relationship between Bikeshare and Transit: Evidence from the BIXI system in Montreal 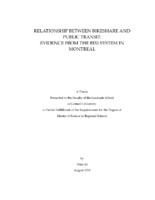 The purpose of this study is to identify the relationship between bikesharing ridership and transit-related variables in Montreal, Canada. Preliminary analysis of BIXI trip logs in 2016 shows there are similarities between the spatial distribution patterns of BIXI ridership and metro ridership, and temporal patterns of bikesharing trips indicate that some annual members are using BIXI as one of their daily commuting modes. The OLS model and the spatial lag model are used to investigate the relationship between bikesharing ridership and independent variables in transit service levels, connectivity and transport-related demographics. The 5-minute walk time buffer is chosen as the measure for the dependent variable and 12 independent variables. The log-log transformed OLS model has a 75% goodness of fit and identifies a number of variables significantly associated with BIXI ridership. In the stepwise regression model, significant variables are metro ridership, street network connectivity, daytime population, number of people that travel to work by walking, number of people that travel to work by bicycle, population aged 20 to 24 (negative), and average household expenditure on private transportation (negative). For 10% increase in metro ridership, a 4.16% increase in BIXI ridership is expected. The highly significant Moran's I indicates strong spatial autocorrelation. LM and robust LM tests justify our choice of the spatial lag model. This study uses both GeoDa and Stata to run the spatial lag model, in order to test the model with different spatial weighting matrices. Results show that the structure of the inverse distance matrix in Stata is more suitable for representing spatial interactions in bikesharing trips between metro buffers. Metro ridership is highly significant and is the second strongest predictor. After removing spatial effects, 10 percent increase in metro ridership is associated with 5.44 percent increase in BIXI ridership. In both the OLS model and the spatial lag model, metro ridership, street network connectivity, number of people that travel to work by walking and number of people that travel to work by bicycle are positively associated with BIXI ridership. This result indicates that transit riders and active travelers are potential users of bikesharing services. Through collaborative and intermodal planning, the relationship between bikeshare and transit could be strengthened and bikeshare could fulfill its potential to be a powerful complement to public transit.