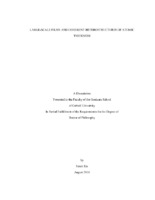 Thin film materials are the key elements in modern technology, including electronics and photonics. The production of semiconducting thin films with spatially-controlled composition has enabled various applications such as computer chips, photovoltaics, and display technologies. A decrease in film thickness to the atomic scale, a challenging limit for traditional semiconductors (such as Si and GaAs), represents the ultimate thinness limit of thin film engineering and would further advance applications such as flexible electronics. Transition metal dichalcogenides (TMDs), which form stable three-atom-thick monolayers, provide an ideal material platform for semiconducting thin film engineering in the ultimate atomic-thickness limit. The unique electronic band structures of monolayer TMDs enable remarkable functionalities of TMD monolayers, including high mobility, direct bandgap, large excitonic effect, and valleytronics. While existing experiments have been demonstrated with mechanically exfoliated samples, the full potential of monolayer TMDs cannot be realized without a method that produces these materials in a scalable manner. There are two major challenges regarding the material synthesis of TMD monolayers—large-scale uniform monolayer film and high-quality heterostructure within the monolayer plane. In this thesis, I present the efforts toward resolving these two challenges based on semiconducting monolayer TMDs. We first describe the synthesis of wafer-scale, high-mobility monolayer TMD films such as molybdenum disulfide. We then demonstrate coherent monolayer TMD heterostructures and superlattices, in which 4% lattice mismatched tungsten disulfide and tungsten diselenide are laterally integrated in the monolayer plane without dislocations. The lattice coherence results in a large strain which is used to precisely engineer the optical band gaps and mechanical deformation of these TMD monolayers. We further construct high-performance (opto-) electronic devices based on heterostructures with monolayer thickness. Finally, we demonstrate that monolayer TMDs can serve as atomic building blocks for creating vertically-heterostructured films containing both TMDs and non-layered materials.