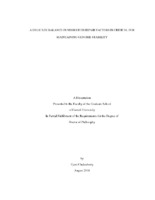 Mismatch repair (MMR) proteins act to correct DNA polymerase errors that arise during DNA replication. They also play vital roles maintaining homologous recombination fidelity during repair of double strand breaks in DNA, by preventing dissimilar sequences from undergoing recombination, a process known as heteroduplex rejection. I showed that maintaining proper levels of MMR proteins is vital for the optimal function of a variety of genome stability pathways. Using a single strand annealing recombination assay that is not linked to DNA replication, I found that mild overexpression of the MMR protein Msh6 improved the efficiency of heteroduplex rejection by compromising Msh2-Msh3 function in the removal of 3’ non-homologous tails, which is a critical intermediate in this recombination pathway. Importantly, I also showed that 3’ tail clipping acts as a critical temporal commitment step during heteroduplex rejection. In contrast to the above observation where overexpression of Msh6 improved recombination fidelity, mild overexpression of Msh6 compromised heteroduplex rejection in an inverted repeat recombination assay that is thought to occur during DNA replication. This disruption occurred through interactions with the replication processivity clamp proliferating cell nuclear antigen (PCNA) and involved the sequestration of Sgs1, a critical component of the rejection machinery. Importantly, co-overexpression of the Msh2-Msh6 complex caused a variety of genomic instabilities by interacting with PCNA and likely disrupting replication fork functions. These instability phenotypes included increased rates of homologous recombination, increased sensitivity to DNA damaging agents such as methyl methanesulfonate, hydroxyurea and 4-nitroquinoline N-oxide, increased loss of heterozygosity, and increased mutation rates. Thus, it is crucial that MMR proteins are maintained at appropriate levels in order to maintain genome stability. Misregulation of the levels of MMR proteins has been observed in multiple cancers; my work provides insights for how overexpression of MMR proteins can play an important role in cancer progression.