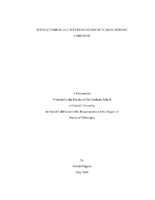 Coding variants segregating in human populations are expected to be largely benign, with deleterious variation occurring principally at rare allele frequencies and limited to conserved genomic sites. The extent to which this deleterious variation burdens human genomes and the mechanisms by which these mutations exert their function, though, remains largely unexplored. To help address this gap, I have contributed towards the development of interactome-scale tools for interrogating missense variation in human disease as well as experimentally measured the impact of thousands of human missense variants on protein interactions and stability. The accumulation of these efforts have helped in characterizing molecular mechanisms of disease-associated mutations and have enabled new insights towards the extent to which functional variation segregates across different human populations. To begin, the development of a massively parallel, site-directed mutagenesis platform for cloning DNA variants, named Clone-seq, is discussed. A study of the impact of 204 disease-associated mutations on protein interactions and stability is then detailed to demonstrate the utility of Clone-seq in genomic studies. Next, an extensive study of >2,000 missense mutations is presented in which widespread protein interaction perturbations by both rare and common human population variants is unveiled. Disruptive variants were found to be enriched within conserved sites in the genome and occurred at increasingly higher rates as allele frequency decreased. Evidence suggesting that disruptive variants persist primarily in less essential regions of the genome is then presented followed by a demonstration of how shared interaction perturbation profiles between population variants and disease-associated mutations can be applied to identify candidate disease-associated mutations from sequencing data. Lastly, the development of an integrated computational and experimental platform for prioritizing de novo missense mutations in developmental disorders is discussed. While protein interaction perturbations represent only one of a multitude of ways in which DNA variants can alter cellular function, nonetheless, the genetic, protein interaction, and population-level insights presented here should represent an important step forward towards an improved understanding of the evolutionary forces that shape the human genome and protein function.