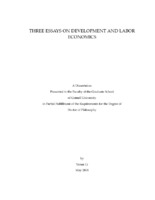 My dissertation comprises three empirical studies on development and labor economics. The first two essays are in the context of National Employment Guarantee Schemes (thereafter, NREGA) in India. In the first one, I study whether existing inequality hinders the implementations of NREGA, using district-level data on land ownership distribution and the implementations of NREGA. To address potential endogeneity issues, I leverage a historical institution in India, the land revenue collection system established by British colonial rulers during 1750-1861, to construct an instrumental variable for land inequality. Both OLS and instrumental variable results give robust evidence that the concentration of land ownership reduces public works provision. This relationship could be explained by the mechanism that public works schemes raise agricultural wages in the private labor market, thereby incentivizing big landlords to use their political power to oppose this program. This paper provides the first empirical evidence that the concentration of landownership, a proxy for political power, is a hurdle to providing public employment to the poor. In the second essay, I focus on the participants of NREGA and study the wage bargaining effect of participating in NREGA. Using a household level panel and a difference-in-differences framework, I find indirect evidence that participating in NREGA would increase the wage bargaining power for both participants themselves and for their spouses in the private labor market. The third essay focuses on a different social protection policy, minimum wage standards in China. I utilize a spatial lag methodology to study city level strategic interactions in setting and enforcing minimum wage standards during 2004-2012 in China. This analysis finds strong evidence of spatial interdependence in minimum wage standards and enforcement among main cities in China. If other cities decrease minimum wage standards by 1 RMB, the host city will decrease its standard by about 0.7-3.2 RMB. If the violation rate in other cities increases by 1 percentage point, the host city will respond by an increase of roughly 0.4-1.0 percentage points. These interactions suggest the need for policy coordination in labor regulation.