Mismatched Governance: Exploring the Relationship Between Rural and Urban Governance Forms and Urban Development in India 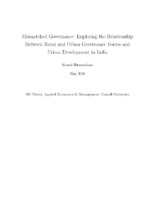 By conservative census estimates, roughly half of the settlements in India that are urban in nature are governed by rural governance forms instead of urban ones. This paper investigates whether this governance mismatch is associated with the development of settlements. I first empirically explore whether differences exist between rural-governed and urban-governed urban settlements on average, and on finding such differences, I explore the causal effect of urban governance forms, and find that they appear to be broadly associated with better levels of high spillover development indicators. The effect on low spillover development indicators is negative or mixed. The negative association with low spillover indicators need not, however, be indicative of a negative phenomenon for development overall. The results suggest that there is a case to convert rural governance forms in urban settlements to urban governance forms, and I conclude by exploring the political economy of such conversions.