Understanding drought in the Caribbean 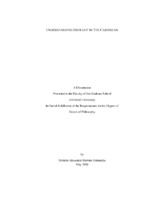 This work analyzes drought variability, its trends, and its dynamics in the Caribbean, using instrumental records, reanalyses, and global climate model simulations for the periods 1950–2016 and 1979–2016. We use the self-calibrating Palmer Drought Severity Index (scPDSI) with the UN Food and Agriculture Organization (FAO) reference evapotranspiration to construct the first high-resolution (4 km) drought atlas for the Caribbean spanning 1950 to near-present. We find a significant drying in the Caribbean and Central America, which contrast with a relatively (but not-significant) wetting of Florida Peninsula during the period analyzed. We also find that the 2013–2016 “Pan-Caribbean drought” is the worst dry interval observed in the Caribbean during the period analyzed, and according to our results, anthropogenic warming contributed to 16–18% of its severity. Anthropogenic warming also contributed to ~7% of the Caribbean Islands that experienced drought conditions during the Pan-Caribbean drought, which roughly represents ~16,800 km2. We also find that during droughts that occurred in 1997–1998, 2009–2010, and 2013–2016, a predominant moisture divergence over the Caribbean Sea and northeastern South America correlates to anomalous dry conditions and negative precipitation minus evaporation (P–E) values in the Caribbean. However, moisture convergence is also observed at local scales during these droughts, especially on the eastern coast of Central America and Florida Peninsula. These results are consistent with previous work that suggest a strong moisture divergence in northeastern South America as a critical driver of drought during El Niño events in northeastern South America and/or southeastern Caribbean Islands. The results from this dissertation provides further insights into the nature of drought in the Caribbean and Central America, useful for researchers and stakeholders alike. This is especially important, since climate models consistently project a significant drying over the Caribbean and Central America the coming decades due to anthropogenic climate change.