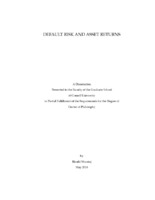 This dissertation investigates the role of default risk on asset returns. In the first essay, I study the role of default risk spillovers on an intra-industry setting and its relevance to equity return predictability. In the second essay, I empirally explore the relationship between default risk and informed trading in the Credit Default Swap (CDS) and equity market. In Chapter 1, I describe the two methods used for estimating the probability of default. The first one, which is used for generating the data for this thesis is named dynamic discrete-time hazard rate model with industry fixed effects as in Chava and Jarrow (2004), and the second one is a structural approach titled Merton’s distance to default (DD) studied in Vassalou and Xing (2004). I go over the pros and cons of each method and the motivation of why the former is used for this study. In summary, the hazard rate method has a higher out-of-sample predictive power, does not assume that all assets of a firm trade which is an unrealistic assumption made by the structural model, and Distance to Default variable if included in the hazard rate model does not have any incremental power as shown in Campbell et al. (2008). In Chapter 2, “Default Risk Spillovers and Intra-Industry Return Predictabil- ity”, I observe that stocks far from the most distressed stocks in their industry earn significantly higher future returns. I connect less distressed stocks to the most distressed stocks in their industry through β−distance and common insti- tutional ownership. Disconnectedness forecasts higher future returns, especially when returns of the most distressed stocks are high. A one standard devia- tion increase in disconnectedness with the most distressed stocks increases next month returns by 0.53%. A strategy that buys stocks that are far from the dis- tressed firms and sells stocks near the distressed firms yields 7.44% annualized Fama French five-factor alpha with t-statistic 3.22. I argue that this predictability arises through an intra-industry default risk propagation mechanism, which af- fects the liquidation value of connected firms’ assets. Predictability is strongest in industries with the lowest levels of asset redeployability. Taken together, these findings suggest that intra-industry distress risk spillovers predict equity returns. In Chapter 3 (joint with Gaurav Kankanhalli), “Default Risk and Informed Trading: Evidence from the CDS Market”, in a sample of the 520 most frequently-traded single-name non-sovereign credit default swaps (CDS), we find evidence of a non-monotonic relationship between informed trading (prox- ied by PIN) and quoted CDS spreads, as a function of default risk (proxied by reduced-form estimates of default probability, or DP). Unconditionally, higher PIN is associated with higher quoted CDS spreads, as predicted by models with market makers facing an adverse selection problem. However, conditional on higher DP, the marginal effect of PIN on spreads decreases. This is consistent with the notion that at higher levels of default risk the private signals of in- formed traders have less value, reducing the adverse selection problem faced by the market maker and, at the margin, reducing spreads. VAR analysis confirms that the private signal of informed traders is informative about future default risk, as lagged PIN predicts lead , but only at shorter horizons. An investment strategy that buys low PIN low DP stocks and sells high PIN high DP stocks earns average daily returns of 0.13% and average daily Fama-French 3-factor alpha of 0.17% (with a t-statistic of 4.86). Taken together, our results provide new insights into the joint dynamics of informed trading and default risk, and their implications on CDS spreads and equity returns.