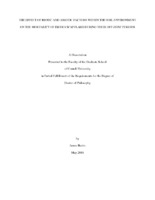 The blacklegged tick (Ixodes scapularis) is the primary vector for multiple widespread tick-borne diseases in the United States, including anaplasmosis, babesiosis, Powassan virus, and Lyme disease. This species spends most of its two-year life cycle either questing for hosts on leaf litter and low-lying vegetation, or inactive during non-questing periods in the soil. Despite the prolonged periods this species spends off-host, the effects of the biotic and abiotic components of the soil ecosystem on the mortality of I. scapularis is not well-characterized. I began by exploring the effect of hot, dry weather conditions on Lyme disease incidences in geographic areas with differing endemic histories. In long-term endemic areas the incidence of Lyme disease was significantly lower during hot and dry weather, while in areas that have become endemic for Lyme disease more recently, there was a strong positive linear relationship between time and incidence. Similarly, I demonstrated that hot, dry weather conditions negatively affected the activity of questing I. scapularis. Next, I evaluated the efficacy of using microcosms to deploy and recover ticks from the field. This technique allowed me to exclude host-related factors and investigate the direct effects of local-scale site factors on tick survival. These microcosms were used to investigate the effect of weather on overwintering I. scapularis nymphs, and also determine the effect of soil-dwelling arthropod predators on the survival of engorged larval and nymphal I. scapularis. The timing of I. scapularis mortality events during their overwintering period (September – June) was determined by placing ticks in field microcosms and collecting subsets of the microcosms every 50 days throughout this period. Lipid storage levels were also quantified to determine the body condition of all the ticks that were retrieved from the field. Nymphal I. scapularis experienced limited mortality over the winter, with the majority perishing in the spring and early summer. Survival during this period was also positively correlated with tick body condition (i.e. lipid storage). Additionally, these data were compared with those from a previous season during which the weather was relatively cold and wet. Tick survival and energy storage were found to be significantly higher during the cold and wet year, but further investigation was needed as these data were collected on different sites. To further explore the effect of winter weather, snow cover was manipulated over microcosms containing I. scapularis nymphs. At the end of the season snow removal was found to have no effect on overwinter tick survival, but there was a negative relationship between tick survival and the number of large arthropod predators in the microcosms. The prevalence of soil-dwelling arthropod predators which would target I. scapularis nymphs and engorged larvae was investigated, both in the laboratory and under field conditions. Overall, it was observed that few species of arthropod predator targeted I. scapularis, but those which did showed a preference for engorged larvae over unfed nymphs. An important exception was Schizocosa ocreata, a common species of wolf spider, which was found to target I. scapularis in the laboratory, and significantly reduced tick survival when added to microcosms under field conditions. I concluded by outlining the future research necessary to further investigate the impact of the soil environment on tick activity and behavior, with the goal of determining the factors driving the high degree of observed spatio-temporal variability present in many tick borne-disease systems.