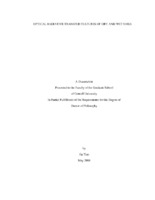 Due to the importance of soil moisture in many fields of study, and given the sparsity of systematic research on radiative transfer features of moist soil in the optical domain, this dissertation focuses on both the spectral reflectance and transmittance features of dry and wet soils. In this work, the spectral reflectance and transmittance of soil are examined. The experiments lead to possible physical explanations for the spectral and directional features of reflectance spectra, and the results suggest how optical and proximal remote sensing might be useful in observations of soil moisture content. The first experiment considered the change in spectral reflectance of soil samples during evaporative drying. The water absorption band depths at 970 nm and 1160 nm, in near infrared, decreased monotonically as the water content decreased, but they were not detectable in all samples; these water absorption bands will not be generally useful for observing surface soil moisture. In contrast, the band depths of the 1440 nm and 1930 nm absorption features were very responsive to the water content over the entire drying cycle. The change in band depth at 1930 nm was particularly interesting since the direction of the change reversed simultaneous with soil water evaporation rate change. A simple mathematical model suggests that the pattern of change in the band depth is related to the near extinction of light at the band center relative to the band shoulders. The second experiment examined the degree to which light transmitted through quartz sand samples would maintain any directional characteristics. Transmittance decreased monotonically as the illumination angle increase, but slowly at all wavelengths. This indicates that directional radiation transmitted through the sand layer becomes diffuse with a millimeters-thin sand layer. For the saturated samples, the influence of water on light transmittance in the VNIR (350-1300 nm) was the reverse of that in the SWIR (1330-2500 nm) wavelength region. In the VNIR, transmittance increased in the saturated sample relative to the dry sample, while transmittance decreased sharply after 1330 nm, with obvious spectral features characteristic of water absorption. Analysis of transmittance by quartz sand samples suggests that most of the directional variation due to the change in illumination angle can be attributed to surface reflective loss. The implication is that the directional reflection may be treated as a surface phenomenon, with the volume reflectance contributing a diffuse component. The third experiment considered directional spectral reflectance of soil samples under dry and saturated conditions. When the samples were dry, the directional reflectance changed obviously with the phase angle, showing a stronger backward reflectance, while the forward reflectance was generally lower. For saturated soil samples, the directional characteristics of spectral reflectance apparent with dry soil were substantially reduced. In particular, the strong backward scattering weakened. Instead, the directional spectral reflectance became less sensitive to changes in both the illumination angle and the observation angle, especially for dark soils. Added water not only darkened the soil reflectance, but also eliminated the directional differences. This would make it difficult to discern soil structural properties when the soil moisture content is high.