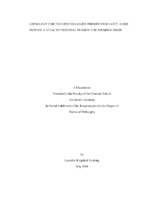 Highly unsaturated omega-3 fatty acids (HUFAs), are physiologically vital nutrients that are scarce in nature. Several major groups of freshwater primary producers are rich in HUFAs while terrestrial primary producers contain little to no HUFAs, but do contain their molecular precursor. Unmet HUFA demand may lead to mismatches between animals and their resources, resulting in limitation. Studies suggest that HUFAs may to be essential nutrients for animals with access HUFA-rich resources while others appear to be efficient at synthesizing HUFAs from the molecular precursor. While HUFAs are considered essential for many freshwater animals, much less is known about the HUFA needs of wild animals in terrestrial ecosystems. Emerging freshwater insects may supply riparian predators with HUFAs, providing a crucial nutritional subsidy, but also making these consumers dependent upon freshwater HUFAs. After synthesizing the literature on HUFAs in natural ecosystems, I explored how HUFA availability in nature shapes consumer HUFAs requirements and use of subsidies in two species of riparian birds, Tree Swallows (Tachycineta bicolor) and Eastern Phoebes (Sayornis phoebe). In laboratory studies, I found that chicks of both species performed better on diets richer in HUFAs compared to diets richer in the HUFA precursor. In a field studies, I found that freshwater insects were significantly richer in HUFAs than were terrestrial insects. Freshwater insects provided Eastern Phoebes with HUFAs even when chicks consumed far more terrestrial than freshwater insects. In addition, while Eastern Phoebes consumed freshwater insects across the landscape, relative HUFA availability and other environmental factors had little effect on the degree to which they relied upon freshwater insect HUFA subsidies. Overall, this suggests that subsidies are likely to be important when there are major differences between the nutritional quality of local resources and of subsidies. My work indicates that HUFAs can be critically important in natural terrestrial ecosystems. HUFAs are a crucial dimension of food quality for developmental performance in two riparian avian insectivores. In addition, even when freshwater subsidies to riparian areas are relatively small, they can have profound impacts in nature as sources of critical nutrients that are scarce in terrestrial ecosystems.