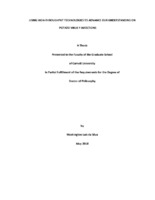 Potato virus Y (PVY) is a major virus pathogen of potato worldwide. Surveys indicate that re-combinant strains of PVY have emerged in recent years to predominate in the U.S. potato crop and that the genetic diversity among and within PVY strains is prodigious. Vegetative propaga-tion of potato via tubers allows PVY to survive year to year and to be transported over long dis-tances. Whereas, aphids are primarily responsible for spread of PVY within the crop and over regional distances. Furthermore, the tuber necrotic strain (PVYNTN) is associated with potato tuber necrotic ringspot disease (PTNRD), a tuber deformity that negatively impacts tuber quali-ty, marketability, and poses a serious threat to seed and commercial potato production world-wide. To map loci that influence tuber and foliar symptoms in potatoes infected with PVYNTN and the length of tuber dormancy, two potato populations were genotyped with a potato SNP chip. QTL analyses revealed major-effect QTLs in a Waneta x Pike cross for mosaic on chromosomes 4 and 5, and for PTNRD and for foliar-necrosis symptoms on chromosomes 4 and 5, respective-ly. QTLs for dormancy were detected on chromosomes 2, 3, 5, 6, and 8, in a Waneta x Superior cross. Locating QTLs associated with PVY-related symptoms and tuber dormancy provides a framework for breeders to develop varieties with resistance to multiple PVY-symptoms and to manipulate tuber dormancy length. Illumina high-throughput sequencing was used to study the quasispecies diversity of 15 isolates representing seven different PVY strains and to investigate how transmission modes (insect and mechanical) are contributing to the evolution and diversification of PVY. Eight were PVYN isolates and six of those came from the same geographic region in two different years. A con-sensus sequence, without indels or insertions, was successfully extracted from the sequenced reads of each isolate after being mapped to the strain reference genome. PVYN had a higher population genetic diversity than any other strain evaluated and the population genetic diversi-ty of the PVYN isolates, differed between collection years and sites. We found that the popula-tion diversity of PVY varies by the virus strain but doesn’t differ among transmission modes. Our data suggest that each transmission mode exerts unique selection pressures on the virus population and allows different mutations to accumulate and become fixed. Knowledge of how rapidly PVY can evolve and of the factors driving PVY quasispecies diversity could be used to enhance the efficiency of PVY management practices in potato fields.