THEATRES OF THE SUBJECT: THEATRICALITY AND DIALECTIC IN CONTEMPORARY FRENCH THOUGHT 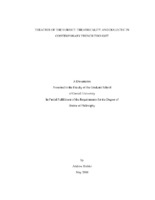 This dissertation argues for the singularity with which the theatre, conceived as a fleshly encounter with language, constitutes a matrix for social change in the age of global capitalism. The project traces a genealogy of French dramatists and theatre theorists who share in common an unprecedented deployment of the stage as a model for dialectical thought, which they also conceive of as integral to the question of human subjectivity. The dissertation demonstrates how the formal divisions which give the theatre its specificity – its tension between dramatic text and the horizon of live performance, its mimetic and spatial disjunctions, its opposition of spectator and actor – invariably lead practitioners and theorists to take a stand with respect to two orientations toward the subject. They are distinguished, I argue, by their different attitudes concerning the aleatory, unpredictable nature of live theatrical performance. The stakes of the project for theatre and performance studies lie in its affirmationist acount of theatrical mimesis. Far from constituting a site of representational closure and binary opposition to be deconstructed and overcome, I insist upon a reading of theatricality in terms of dialectical scission, in which the stage’s formal constraints provide the substrate for eruptions of the unthought within which change finds its bearings. By delineating two subjective orientations in theatre theory and practice, this dissertation marshals the stage’s formidable resources in a battle against the finitude that attends every relinking of dialectical division, and which grounds the ideological shadow play that sustains power in our current conjuncture. Running against the grain of those critical tendencies that would reduce the theatre to an irreparably metaphysical, and thus politically retrograde construct, this project asserts the necessity of the theatre and the singularity with which it is capable of orienting us in the confusion of our times.