Present Junctures: World Literature, Translation, and the Limits of Contemporaneity 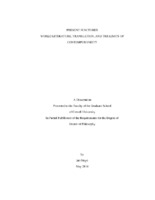 Present Junctures approaches world literature from a translational and comparative perspective by asking, for a situated “we,” who, in the world, shares “our” time, and who is excluded from “our” framings of the present? Present Junctures reads works of contemporary world literature that figure these boundaries between who is and who is not considered “contemporary.” Reading works by writers as diverse as Geoff Dyer, J.M. Coetzee, Maryse Condé, Edouard Levé, and Ivan Vladislavić, it argues that the literary work of de-limiting the now is structurally analogous to the work of translation. Just as translators merge literary cultures by producing translated texts, each framing of the present generates intercultural links. And just as translation is unidirectional and asymmetrical, producing a text first and foremost for a target readership, making the originating context available in an altered form, and not the other way around, so is contemporaneity a determination of relevance and urgency for the benefit of a limited receiving context. The four chapters of Present Junctures illustrate different critical aspects of contemporaneity, showing it to be generative, limited by opacity, provisional, and secular. Each chapter also explores a different scale of worldliness at which contemporary world literature attempts to operate: the world city, the trans-national, the inter-national, and the global.