Essays in Labor and Education Economics 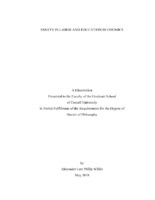 This dissertation consists of three essays, each using advanced empirical methods to address important questions within the fields of labor and education economics. In Chapter 1, I exploit a Swedish reform that eliminated the fixed national pay scale for teachers to present novel evidence on the labor market effects of wage decentralization. Identification of the causal effect of the reform is achieved by using differences in non-teacher wages across local labor markets prior to the reform as a measure of treatment intensity in a dose-response difference-in-difference framework. I find that decentralization induces large changes in teacher pay, and that these changes are entirely financed through a reallocation of existing education resources. The magnitude of the wage effect is negatively related to teacher age, such that the reform led to a disproportionate increase in entry wage and a flattening of the age-wage relationship. Contrary to the predictions of the Roy model, decentralization does not impact teacher composition or student outcomes. I show that a main reason for this relates to general equilibrium and wage spillover effects to substitute occupations. In Chapter 2, which is joint work with Anders Böhlmark, we examine how ethnic residential segregation affects long-term outcomes of immigrants and natives. The key challenge with identifying neighborhood effects is that individuals sort across regions for reasons that are unobserved by the researcher but relevant as determinants of individual outcomes. Such nonrandom selection leads to invalid inference in correlational studies since individuals in neighborhoods with different population compositions are not comparable even after adjusting for differences in observable characteristics. To overcome this issue, we borrow theoretical insight from the one-sided tipping point model used by Card, Mas and Rothstein (2008). This model predicts that residential segregation can arise due to social interactions in white preferences: once the minority share in a neighborhood passes a certain “tipping point,” the neighborhood will be subject to white flight and avoidance, causing a discontinuity in white population growth. After having found evidence for the tipping phenomenon in Sweden, we use the tipping threshold as a source of exogenous variation in population composition to provide new evidence on the effect of neighborhood segregation on individual outcomes. We find negative effects on the educational attainment of native children. These effects are temporary and do not carry over to the labor market. We show that these transitory education effects are isolated to natives who leave tipped areas, suggesting that they may be driven by short-term disruptions caused by moving. In Chapter 3, which is joint work with Michael Lovenheim, we analyze the effect of teacher collective bargaining laws on long-run labor market and educational attainment outcomes, exploiting the timing of passage of duty-to-bargain (DTB) laws across cohorts within states and across states over time. We find robust evidence that exposure to teacher DTB laws worsens the future labor market outcomes of men: in the first 10 years after passage of a DTB law, male earnings decline by $1,974 (or 3.64%) per year and hours worked decrease by 0.43 hours per week. The earnings estimates for men indicate that teacher collective bargaining reduces earnings by $198.1 billion in the US annually. We also find evidence of lower male employment rates. Exposure to DTB laws leads to reductions in the skill levels of the occupations into which male workers sort as well. Effects are largest among black and Hispanic men. Estimates among women are often confounded by secular trend variation, though we do find suggestive evidence of negative impacts among non-white women. Using data from the 1979 National Longitudinal Survey of Youth, we demonstrate that DTB laws lead to reductions in measured non-cognitive skills among young men.