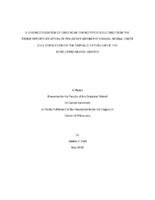 Affecting approximately 1-in-700 live births, “orofacial clefting” represents the most common class of craniofacial birth defect. Although not a major cause of mortality, these conditions pose significant problems for those affected, including necessary surgical interventions, psychological difficulty and a higher mortality risk. Epidemiological studies of populations affected by clefting, combined with genetic analyses, have identified candidate genes, genomic regions of interest as well as environmental risk factors. Analyses of these factors in mouse models has provided insight into craniofacial morphogenesis. Concurrently, novel factors, discovered through mouse mutagenesis, have been identified in affected human populations. Using modern imaging techniques, overt clefting has been revealed to be part of larger phenotypic spectrum. For this reason, detailed morphological studies of mouse-mutants with craniofacial phenotypes are necessary for effective modeling and comparisons to be made. The Pbx genes (Pbx 1-2-3), TALE homeodomain-containing transcription factors, are believed to play integral roles in the development of many organ systems including the midfacial complex. By immunofluorescence antibody assay, this study provides the first detailed analyses of how Pbx1 & Pbx2 are expressed temporally and spatially in the developing murine midface, over the developmental time-period critical for development of the lip, primary and secondary palates (E10.5 to E13.5). Pbx1&2 expression was observed in epithelium and mesenchyme from the very earliest stages of facial morphogenesis, and into the later stages of palatal development. Excision of Pbx1 from the cephalic epithelium or pre-migratory Cranial Neural Crest cells revealed highly distinct and temporally divergent phenotypes. For the cephalic epithelial mutant (Pbx1fl/fl ; Pbx2wt, FoxG1Crewt/+), cleft lip, extending into the primary palate with clefting of the secondary palate was the primary observation, whereas Pbx1 excision from premigratory Cranial Neural Crest Cells on a Pbx2 deficient background (Pbx1fl/fl ; Pbx2¬+/-, Wnt1Cretg/+), yielded cleft palate only with a “bridging phenotype” rostrally and palatal shelf hypoplasia. Micro-CT analysis enabled identification of craniofacial elements responsible for the distinct facial/palatal phenotypes. Specifically, the Epithelial Mutant exhibited: 1) an increase in the distance from the incisor alveolus to the caudal basisphenoid; 2) rostro-caudal shortening and widening of the premaxilla; 3) diagonal lengthening of the maxilla; 4) reduction of the maxillary width; and 5) widening of the distance between the zygomatic spurs of the maxillae. The Cranial Neural Crest Cell mutant displayed: 1) rostro-caudal shortening of the cranial base as measured from the basioccipital bone to the incisor alveolus; 2) increase of premaxillary width at both rostral tip and caudal end; 3) shortening and widening of the maxillae; and 4) an increase in the inter-maxillary distance. Although divergent, the morphological outcome in both mutants was a broadening and shortening of the midface. Because the morphological perturbations in the Cranial Neural Crest Cell Mutant suggested a re-arrangement of the relationship between the rostral and caudal fields of the secondary palate, the regional expression patterns of known markers of these regions was examined by in situ hybridization. These studies demonstrated lateralization of the anterior field of the secondary palate and a sagittal, rostral displacement of the posterior palatal field. This study provides the field with detailed expression patterns for Pbx proteins in the developing midface as well as analysis of the facial phenotypes that result from epithelial and ecto-mesenchymal loss of Pbx genes. As such it will be a valuable resource for craniofacial research.