Cagecraft: Prison, Performance, and the Making of Carceral Subjects 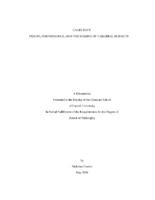 This dissertation draws upon five years’ work as a volunteer teaching artist in the Auburn Correctional Facility, a maximum-security prison in Upstate New York, where I have co-facilitated a company of incarcerated poets and performers, the Phoenix Players Theatre Group. “Cagecraft” is my term for the process of making theatre in response to imprisonment, a concept that I employ to study a range of modern and contemporary performances made with, by, and about incarcerated peoples. I examine photographs of a 1908 prison performance by Buffalo Bill’s Wild West Show alongside the Edison Company’s film Execution of Czolgosz with Panorama of Auburn Prison (1901); the dramaturgy of playwright Naomi Wallace; and a collaboration between conceptual artist Jackie Sumell and Herman Wallace—a Black Panther and one of the “Angola 3,” who was incarcerated in solitary confinement for over 40 years. In the case of the Phoenix Players, cagecraft denotes physical theatre techniques used to create a space in which the men feel empowered to share personal narratives, which form the basis of collectively devised performances for an invited audience. Cagecraft, I argue, catalyzes the occasion for incarcerated artists to be witnessed as full human beings, an experience that has transformative effects individually and socially. Central to this study is a theory of the “carceral subject,” which characterizes a contingent state of capture and bondage that coalesces most dramatically on the minoritarian and subaltern. To be recognized as a person entails surrendering to a cage made from an individualizing network of social, cultural, and institutional traumas, structured by the assemblage of the prison. Through cagecraft, I argue, carceral subjects can interrupt trauma, enacting utopian, world-making gestures from behind bars. I conclude that cagecraft has the power to liberate actors and audiences, at least in the moment of performance, because artists re-make themselves and therefore re-make the world.