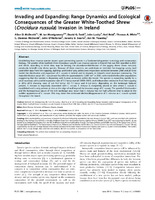 Establishing how invasive species impact upon pre-existing species is a fundamental question in ecology and conservation biology. The greater white-toothed shrew (Crocidura russula) is an invasive species in Ireland that was first recorded in 2007 and which, according to initial data, may be limiting the abundance/distribution of the pygmy shrew (Sorex minutus), previously Ireland’s only shrew species. Because of these concerns, we undertook an intensive live-trapping survey (and used other data from live-trapping, sightings and bird of prey pellets/nest inspections collected between 2006 and 2013) to model the distribution and expansion of C. russula in Ireland and its impacts on Ireland’s small mammal community. The main distribution range of C. russula was found to be approximately 7,600 km2 in 2013, with established outlier populations suggesting that the species is dispersing with human assistance within the island. The species is expanding rapidly for a small mammal, with a radial expansion rate of 5.5 km/yr overall (2008–2013), and independent estimates from live-trapping in 2012–2013 showing rates of 2.4–14.1 km/yr, 0.5–7.1 km/yr and 0–5.6 km/yr depending on the landscape features present. S. minutus is negatively associated with C. russula. S. minutus is completely absent at sites where C. russula is established and is only present at sites at the edge of and beyond the invasion range of C. russula. The speed of this invasion and the homogenous nature of the Irish landscape may mean that S. minutus has not had sufficient time to adapt to the sudden appearance of C. russula. This may mean the continued decline/disappearance of S. minutus as C. russula spreads throughout the island.