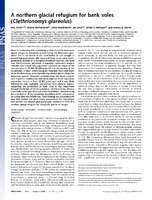 There is controversy and uncertainty on how far north there were glacial refugia for temperate species during the Pleistocene glaciations and in the extent of the contribution of such refugia to present-day populations. We examined these issues using phylogeographic analysis of a European woodland mammal, the bank vole (Clethrionomys glareolus). A Bayesian coalescence analysis indicates that a bank vole population survived the height of the last glaciation (25,000–10,000 years B.P.) in the vicinity of the Carpathians, a major central European mountain chain well north of the Mediterranean areas typically regarded as glacial refugia for temperate species. Parameter estimates from the fitted isolation with migration model show that the divergence of the Carpathian population started at least 22,000 years ago, and it was likely followed by only negligible immigration from adjacent regions, suggesting the persistence of bank voles in the Carpathians through the height of the last glaciation. On the contrary, there is clear evidence for gene flow out of the Carpathians, demonstrating the contribution of the Carpathian population to the colonization of Europe after the Pleistocene. These findings are consistent with data from animal and plant fossils recovered in the Carpathians and provide the clearest phylogeographic evidence to date of a northern glacial refugium for temperate species in Europe.

Proceedings of the National Academy of Sciences of the USA