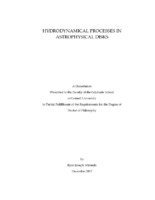 Accretion disks--distributions of gas orbiting a central massive object--are found in a variety of astrophysical settings, such as protoplanetary disks around young stars and disks around supermassive black holes in galactic centers. In this dissertation, I explore several hydrodynamical processes in accretion disks, primarily using numerical hydrodynamics simulations. I study the effect of viscosity on unstable oscillation modes in disks around black holes, showing that it can either suppress or enhance instability. I study the effect of a vortex instability that may arise at the edges of dead zones in protoplanetary disks, showing that it can transport angular momentum through the disk, as well as trap dust, with the latter process resulting in observable morphological features. I investigate the resonant truncation of disks in binaries when they are misaligned with the binary orbital plane, showing that misaligned disks around stars with companions are larger than aligned disks, and that misaligned circumbinary disks generally have smaller cavities than aligned disks. I undertake a comprehensive investigation of the dynamics and evolution of circumbinary disks, with a particular emphasis on the transfer of angular momentum between the disk and binary. I find that circumbinary disks may cause binaries to expand, contrary to the typical expectation that disks tend to harden binaries. Finally, I investigate the migration of a low-mass planets near the inner edge of protoplanetary disk, and show that interactions with the inner edge halt the migration of the planet when its orbital radius is several times larger than the inner disk radius.