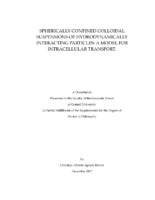 The diffusion in and rheology of hydrodynamically interacting colloids confined by a spherical cavity via dynamic simulation is studied as a model for intracellular and other confined biophysical transport. The modeling of transport and rheology in such confined inhomogeneous soft materials requires an accurate description of the microscopic forces driving particle motion, such as entropic and hydrodynamic forces, and of particle interactions with nearby boundaries. Previous models of such micro-confined transport behavior had been limited primarily to a single particle inside a spherical cavity. Although attempts had been made prior to this work to extend such models to more than one confined particle, none had yet successfully accounted for the effects of hydrodynamics, owing to the difficulties of modeling many-body long-ranged interactions. To accurately model spherically confined suspensions, new far-field mobility functions are derived and, together with the appropriate near-field resistance functions, implemented in a Stokesian-dynamics like approach. The method fully accounts for all many-body far-field interactions and near-field interactions both between the particles themselves and between particles and the enclosing cavity. Utilizing the newly developed method, we study short- and long- time self-diffusion at equilibrium, with a focus on the dependence of the former on particle positions relative to the cavity, and of both on volume fraction and size ratio. It is found that the cavity exerts qualitative changes in transport behavior, such as a position dependent and anisotropic short-time self-diffusivity and anisotropic long-time transport behavior. Such qualitative changes suggest that careful interpretation of experimental measurements in 3D confined suspensions requires accounting for such confinement induced behaviors. To elucidate the effects of confinement on inter-particle hydrodynamic interactions, the method is utilized to determine the concentrated mobility of particles in the spherically confined domain. Confinement is found to induce qualitative changes in the functional dependence of particle entrainment with inter-particle separation. For widely separated particles, the functional dependence on inter-particle separation can be predicted via a Green's function. How this behavior can be utilized to develop a more accurate framework for two-point microrheology measurements near confining boundaries is discussed.