Under the Skin and Into the Social: Examining the Neuroscience of Social Problems and Inequality 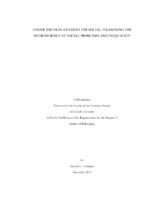 This dissertation examines how and why neuroscience has entered the field of social problems research. A subset of neuroscientists I studied is now doing research with the explicit purpose of addressing poverty, adversity, and inequality. Their foundational claim is that experiences in the world and interactions with other people – an “environment of relationships” – are integral in shaping brain development. I investigate how neuroscientists and policymakers produce scientific knowledge about the developing brain, and put forward a new sociotechnical vision for governance. Those involved in this project understand themselves as using science to advocate for a more just society that takes responsibility for the health and well being of its most vulnerable and disadvantaged citizens. Despite these good intentions, my neuroscientist interviewees found themselves at the center of controversy during their early careers. Critics from within the scientific community were worried that the research was based upon eugenicist and racist assumptions. The neuroscience community eventually accepted the work, and the controversy subsided. More recently, however, the studies have gotten wider coverage, and a similar strand of criticism, albeit from outside of the scientific community, has resurfaced. Through ethnographic methods, I studied the knowledge production and policymaking practices of this group, as well as the controversy that ensued and how my participants react to it. I pay close attention to the science-policy relationship, and show that building neuroscience-based policy requires extensive negotiation amongst actors, where they must contend with both social and scientific concerns. The production of a new narrative called the “Brain Story” exemplifies this process. I found that neuroscience brings new attention to age-old problems, and positions itself as a powerful new voice in the arena of early childhood development by pulling together discourses of science, economics, and our moral responsibility to children. I argue that the research is at once a reflection and repudiation of biomedical modes of analysis. Though this approach values biomedical evidence about the individual, scientists I interviewed believe that the best way to solve social problems is by intervening at the level of the social. Though well-intentioned, the research may produce unintended consequences.