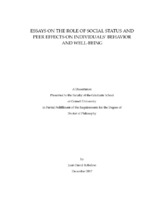 Classic economics has long underestimated the role of social contexts on indi- viduals’ behavior. Individuals are not only driven by independent incentives but also by social influence as well as social approval and recognition. This dissertation contains three papers concerning the role of peer effects and social status on individuals’ behavior and well-being. The first chapter analyzes adolescents peer effects on cigarettes consump- tion by considering the popularity (i.e., social network centrality measures) of smokers and non-smokers within high schools. The analysis is based on the Ad- dHealth dataset, which has exhaustive data on social networks in the sampled high schools and detailed information about students and household charac- teristics. We use variations across cohorts within schools by using school fixed effects, lagged peer’s behavior at the cohort level as well as instrumental vari- ables. We find that the popularity of smokers increases the probability of indi- viduals smoking, while the popularity of non-smokers has the opposite effect. Analogous results apply to the number of cigarettes smoked, as well as the age of initiation. These effects persist up to fourteen years after high school. The second chapter follows a similar strategy to analyze peer effects on high school GPA. Using AddHealth data, we find that the popularity of good stu- dents in mathematics considerably increases individuals’ math GPA the fol- lowing year, while the popularity of bad students has the opposite effect. The positive effect is somewhat stronger for males, yet the negative effect is much stronger for females. These patterns extend to college participation and com- pletion. Thus, the first two chapters of this dissertation show the importance of social status in mediating the strength of peers’ influence. Individuals seem to ‘follow’ the behavior of high-status individuals and avoid that of low-status individuals. The final chapter looks at positional concerns in rural China with respect to rural income and remittances. More specifically, we look at how the average income and average remittances in the local county affect individuals’ subjec- tive well-being (SWB). We find that average rural income has a strong negative effect on SWB, arguably due to income comparisons. However, average remit- tances have a strong positive effect, possibly due to a signal effect of the po- tential opportunities from migration, both for potential migrants and potential remittances receivers.