The Mind On-Stage: Crafting the Self in Anglo-Saxon England 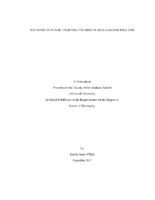 The Mind On-Stage argues that Old English devotional narratives use performative cues to help medieval readers craft a dynamic interior self. While scholars have acknowledged the dramatic nature of Anglo-Saxon literature, comparatively few have studied how medieval readers brought the concept of public performance into the private sphere as they read. Even though patristic and early medieval authors were wary of drama’s ability to move and affect audiences, I argue in the following chapters that these same writers co-opted drama and theatrical spectacle in their own writing, hoping to use the affective power of performance to further instill Christian doctrine within the greater community. My project therefore accounts for the proliferation of performative cues in early medieval texts by examining how authors urged their readers to develop a deep sense of interiority through the use of dialogue, graphic imagery, dramatic figura, and the division of the psyche into distinct characters. This project thus ultimately traces how performative cues within devotional literature turn the medieval reader’s encounter with the silent page into a vibrant inner performance. Chapter One begins with King Alfred’s use of dialogue in his translation of Augustine’s Soliloquies. By dramatizing this internal dialogue through pointed questions and extended metaphors, I argue that the author uses the soliloquy form to script the creation of a dramatic ‘self’. While the Soliloquies rely on dialogue to affect readers, the Old English Psychomachia in Chapter Two depends on the interaction between narrative and manuscript illumination to facilitate active reading and self-care. The poem’s battles are not simple grotesquerie, but rather eye-catching foci that produce affective responses in medieval readers. Chapter Three turns to the devotional power of the homily by examining dramatic dialogue in Vercelli IV. Like Alfred’s Soliloquies, the soul and the body function as protagonist and antagonist, turning the narrative into proto-morality play designed to scare participants into repentance. The Mind On-Stage concludes in Chapter Four with a reading of the Dream of the Rood—the Cross’s vision, filled as it is with precise detail and description, invites readers to visualize and re-enact the Crucifixion scene within their minds. The act of re-reading the poem and visualizing the vision in turn requires readers to become part of a discursive devotional loop that demands continual prayer, meditation, and rumination.