Archives of Failure: Missing Bodies and the Practice of Recovery 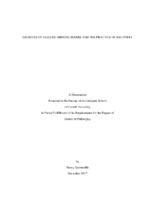 In Archives of Failure, I compare transnational literary and cultural responses to missing bodies in the United States, Mexico, and Central America through careful readings of novels, digital poetry, museums, and performance art. In the first two chapters of my dissertation, I examine literature that engages with forced disappearances in Central America during the late twentieth century civil wars. I pay particular attention to two interrelated concepts that frame encounters with missing bodies: failure and recovery. On the one hand, I argue that Eurocentric understandings of failure, as articulated by legal discourses and capitalist notions of progress, pathologize Central America as region over determined by social and political incompetence necessitating Western intervention. Drawing on Anibal Quijano’s theoretical term, “coloniality of power,” I further claim that the discursive relationship between failure and recovery naturalizes the imperial drive of U.S. Empire expansion because the Third World is narrated as a space of negation that is always already threatening the development of democratic principles. On the other hand, Latino/a/x exile and diasporic literatures can shift this rhetoric of Empire by articulating a failure that exposes the enabling violence of Western intervention. Recovery is not the project of nation-states, but rather a set of practices that express a relationship to historical breaks, missing bodies, and archival silences in an effort to rescript narratives of belonging rather than envision a path to reform. In the last two chapters, I consider literary and visual culture that engages with missing migrants traversing two borderlands: Mexico’s Southern border and the U.S./Mexico desert. As borderland sex work flourishes in Mexico’s Southern border, gendered violence is produced by state policies that deprive displaced people of their legal rights and instantiate a politics of valuation that generates psychological abuse and manipulation. Thus, I argue that Regina Galindo’s performance art, and Claudia Hernandez’s collection of short stories, De fronteras, denormalize state violence by staging a spectacle of death, mourning, and abjection as collective experiences. Conversely, my analysis of digital civil disobedience as enacted by the Electronic Disturbance Theatre maps a decolonial practice of relationality. Using GPS technology, the collective repurposed a cell phone in 2007 that poeticized the Sonoran desert landscape in order to lead lost migrants to water caches. The intention was to deploy an “aesthetics of sustenance” that transform the status of migrants from opaque bodies devoid of legal personhood to translucent figures. If the purpose of recovery is to enact a return to normative states of being or belonging, and if the historical violence of border crossing and forced migrations precludes such promises of return, the Transborder Immigrant Tool remaps the lost migrant and his/her personhood unto a landscape of possibility.