'I Heard Beauty Dying': The Cultural Critique of Plastic in Gravity's Rainbow 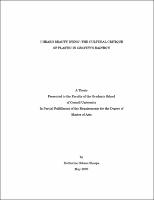 This essay attempts to get a grasp on Pynchon's 700-plus page omnibus, Gravity's Rainbow, by focusing on the development of a single motif in the novel: plastic. It argues that Pynchon takes 1960s and 1970s critiques of supply-driven consumer capitalism, of which plastic was a visible emblem, and makes them more emphatic by placing them into a fictionalized version of the prewar years and the 1940s. Looking backwards, and employing a creative license that allows him to attribute the rise of plastics technology and consumer capitalism to purposely evil entities (like his fictional versions of real-life corporations IG Farben and Shell Oil), Pynchon is able to deliver a narrative that locates the roots of contemporary problems in the technological and business innovations of the World War II era. In Gravity's Rainbow, as in early-'70s America, plastic comes to signify for a suite of negative meanings, from environmental degradation, to an exploitative economic order, to a sadistic psychology in which the desire to achieve immortality results in the destruction and perversion of life itself. The essay is divided into three sections. The first uses a cultural history of plastic to identify popular cultural attitudes towards plastic and locate them in Pynchon's text. The second turns towards a closer reading of Gravity's Rainbow, examining the character Greta Erdmann and her relationship to plastic. The final section considers a second character, Tyrone Slothrop, and concludes that Pynchon's critique of plastic ends on a pessimistic note, positing only a limited possibility for meaningful resistance towards plastic and the material and psychological economies that it represents.