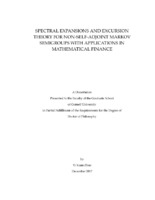 This dissertation consists of three parts. In the first part, we establish a spectral theory in the Hilbert space L2(R+) of the C0-semigroup P and its adjoint bP having as generator, respectively, the Caputo and the right-sided Riemann-Liouville fractional derivatives of index 1 < alpha < 2. These linear operators, which are nonlocal and non-self-adjoint, appear in many recent studies in applied mathematics and also arise as the infinitesimal generators of some substantial processes such as the reflected spectrally negative alpha-stable process. We establish an intertwining relationship between these semigroups and the semigroup of a Bessel type process which is self-adjoint. Relying on this commutation identity, we characterize the spectrum and the (weak) eigenfunctions and provide the spectral expansions of these semigroups on (at least) a dense subset of L2(R+). We also obtain an integral representation of their transition kernels that enables to derive regularity properties. Inspired by this development, we further exploit, in the second part of this dissertation, the concept of intertwining between general Markov semigroups. More specifically, we start by showing that the intertwining relationship between two minimal Markov semigroups acting on Hilbert spaces implies that any recurrent extensions, in the sense of It ˆ o, of these semigroups satisfy the same intertwining identity. Under mild additional assumptions on the intertwining operator, we prove that the converse also holds. This connection enables us to give an interesting probabilistic interpretation of intertwining relationships between Markov semigroups via excursion theory: two such recurrent extensions that intertwine share, under an appropriate normalization, the same local time at the boundary point. Moreover, in the case when one of the (nonself- adjoint) semigroup intertwines with the one of a quasi-diffusion, we obtain an extension of Krein’s theory of strings by showing that its densely defined spectral measure is absolutely continuous with respect to the measure appearing in the Stieltjes representation of the Laplace exponent of the inverse local time. Finally, we illustrate our results with the class of positive self-similar Markov semigroups and also the reflected generalized Laguerre semigroups. For the latter, we obtain their spectral decomposition and provide, under some conditions, a perturbed spectral gap estimate for its convergence to equilibrium. The third part of this dissertation is devoted to the applications of some of these theoretical results to some substantial problems arising in financial mathematics. Keeping in mind the fundamental theorem of asset pricing, we suggest several transformations on a tractable and flexible Markov process (or equivalently, its respective semigroup) in order that the discounted transformed process becomes a (local) martingale while still keeping its tractability. In particular, we suggest using an intertwining approach and/or Bochner’s subordination (random time-change via a subordinator) to achieve this goal. Moreover, in order to illustrate our approach, we discuss in details several examples that include the class of L´evy, self-similar and generalized CIR processes that reveal the usefulness of our result. Furthermore, we provide for the non-self-adjoint pricing semigroups associated to the latter family of processes a spectral expansions on which we carry out some numerical analysis.