Militant Liberalism and Its Discontents: On the Decolonial Origins of Endless War 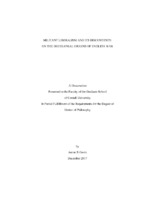 Militant Liberalism and Its Discontents tells a story about the reinvention of liberalism during the era of decolonization. The dissertation shows how a persistent pattern of militant liberalism came to structure the postwar international order—one where the United States engages in militant action to protect the liberal international order from irredeemable illiberal threats, precisely when its hegemonic influence reaches its limit. While anti-totalitarianism and the war on terror are defining episodes in the development of this pattern, the dissertation argues that it was only liberalism’s encounter with decolonization that made the practice of militant liberalism ideologically coherent and enduring. After shattering the civilizational justifications of nineteenth century liberalism, decolonization provided militant liberals with a unique enemy, the Third World, upon which to distinguish and legitimate their own logic of violence, all while destroying alternative political possibilities arising out of the decolonial process. The dissertation explores these themes through four political thinkers—Isaiah Berlin, Louis Henkin, Frantz Fanon, and Carl Schmitt—and narrates a story about the legitimation of militant liberalism and the eventual rise of its discontents. On the one hand, Berlin and Henkin spoke of Thirdworldism as uniquely threatening: the former arguing that Thirdworldist nationalism often morphed into romantic self-assertion, and the latter claiming that Thirdworldists exploited state sovereignty allowing international terrorism to proliferate unbound. In response to these images, Berlin cast liberal violence as universal, ethically responsible, and hence morally superior to nationalist-inspired violence, while Henkin sympathized with US attempts to interpretively modify international law and drape itself under its authority as it hunted terrorists behind sovereign lines. On the other hand, Fanon and Schmitt, as critics of liberalism, challenged these pictures. The actors arising out of decolonization, they claimed, were neither driven by romantic self-assertion nor were they meaningfully sovereign. Instead, the authoritarian disasters and aggressive reactions of decolonization often stemmed from the interventions of militant liberalism and the aggravations of the liberal order itself. The prior accounts of decolonization disavowed liberalism’s complicity in fomenting the conditions that allowed it discontents to proliferate: global terrorism as the diametric force perpetuating endless warfare.