Between facts and faith. The judicial practices of the conseillers in the Parlement de Toulouse (1550-1700) 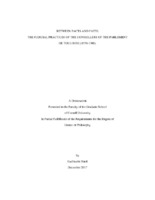 This dissertation studies the professional practices of a college of royal judges in a French sovereign court, from the beginning of the Wars of Religion to the end of the seventeenth century. The Parlement de Toulouse was a court of final appeal that had jurisdiction over a large swath of Southern France, and that the kings used as a bureaucratic outpost to assert their authority over what had remained a rather unruly border-region. Through an analysis of the genealogy of ideas regarding kingship, justice, and the body social, an account of the material and temporal constraints of judicial activity, and a close examination of dozens of lawsuits involving all classes of men and women from the Languedoc region, this research transforms the extensive archive produced by this early-modern French court into a broad-ranging historical analysis that is at once cultural, intellectual, social, and political. The analysis of the court’s records, focused on the magistrates’ professional practices—how they investigated, interrogated, tortured, and sentenced litigants while at the same time translating social and political conflicts into legal statements of fact, demonstrates that the mutually constitutive relationship between ideals of justice and everyday judicial practices, was at the core of a judicial epistemology which, situated between facts and faith, calls for a revision of our understanding of the political role of those courts, and beyond, of our understanding of early-modern political culture.