The interplay between diet, taste, and human health 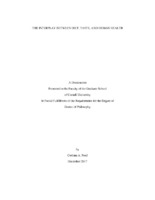 Taste is a biological gate-keeping mechanism, which encourages the consumption or rejection of foods based on their sensory properties. Repeated consumption of palatable, high calorie foods contributes to obesity, one of the most pressing health concerns of our time. Recent reports suggest that taste is weakened in overweight or obese people, although it is unknown whether this dysfunction in the taste system is linked with compensatory eating behaviors to attain satisfactory reward. In a repeated measure study, we showed that those with weakened gustatory signals desired more intensely tasting and higher calorie stimuli. Building upon previous research, we demonstrated longitudinally that a modest weight gain over 8 months associated with decreases in sweet and salty tastes, primarily observed in males of a college-aged population. In the same study, we also found that changes in the consumption of umami-rich foods selectively correlated with umami taste perception. Aiming to clarify this relationship, we conducted a randomized controlled study to show that adaptive changes may occur in the taste system with prolonged exposure to the umami-rich stimuli, monosodium glutamate (MSG). After one month of exposure to MSG, females decreased in their sensitivity to umami taste, while both sexes experienced a lessened appetite for savory foods. Seeking to determine how taste may be connected to emotional eating, a large cross-sectional study evaluated the effect of day-to-day emotional variation on taste function and food liking after college hockey games. Analysis revealed that negative emotions correlated with diminished sweet and enhanced sour perception, and also affected hedonic responses to food. Taken together, our results suggest that weight gain, diet, and emotions can independently influence the taste system, while effect often varies by sex. We supply evidence that decrements in taste may impact food preferences and eating behavior, potentially encouraging the consumption of higher calorie foods. With this in mind, our research provides support that taste and taste dysfunction should be considered in the complex multicomponent etiology of obesity and other diet-related diseases.