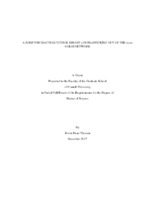 The formation of cargo carriers in the secretory pathway occurs primarily through the action of coat proteins (i.e. COPI, COPII and clathrin coats). However, a subset of cargo carriers, primarily membrane tubules, form independently of coat proteins in a process that remains poorly understood. In an siRNA screen of the human kinome, our lab identified diacylglycerol kinase γ (DGKγ) as important in the generation of coat-independent tubular cargo carriers at the Golgi complex and trans Golgi Network (TGN). DGKs converts diacylglycerol (DAG) into phosphatidic acid (PA). Both DAG and PA are signaling lipids known to regulate different steps in trafficking at the Golgi, and a role for DGKs has been anticipated but remains unclear. Here we show that drug- or siRNA-mediated inhibition of DGKγ reduced delivery of a subset of cargoes to the plasma membrane. Inhibition of DGKγ also caused fragmentation of the Golgi complex, a characteristic phenotype of inhibitors of intra Golgi trafficking, as Golgi structure homeostasis depends on continuous membrane tubule formation between cisternae. Furthermore, we found a novel interaction of DGKγ with the regulatory and catalytic subunits of PPP6, as well as the Rab GEF, DENND4C, both of which contribute to trafficking out of the Golgi and may thus suggest a mechanism for DGKγ in this process. Our findings implicate DGKγ as a regulator of trafficking at the Golgi and TGN via a novel role in tubule formation, with several compelling mechanistic possibilities to unravel.