INVESTIGATING THE ROLE OF SEROTONIN IN OLFACTORY GUIDED BEHAVIOR AND NEUROPHYSIOLOGY 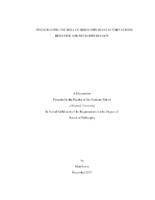 The work presented in this thesis is a series of investigations relating to how serotonin (5-HT) modulates for olfactory behavior and network physiology. 5-HT is a neuromodulator which has been associated with a variety of neural functions including rhythmic pattern generation, reward processing, and sensory processing. I first focused my attention on how 5-HT may modulate olfactory guided behavior using a behavioral pharmacological approach. Within the habituation task we found that infusion of a 5- HT2 receptor antagonist, cinanserin, impaired habituation memory at low (0.001 Pa) odor concentrations, and impaired spontaneous discrimination at all odor concentrations test (0.001, 0.01, and 0.1 Pa). Within the forced choice discrimination task we found a significant reduction in task performance following cinanserin infusion. When sampling behavior and decision times were analyzed, we found that cinanserin infusion significantly increased decision latencies only at one carbon difference tests at 0.01 and 0.1 Pa concentrations. While rats were slower to choose the odor pots at these odor concentrations they were equivalent in accuracy in the task. Put in a speed/accuracy tradeoff context, we found that when animals were asked to discriminate between similar odorants, accuracy is maintained and the expense of speed. Later in my Ph.D. work I moved to studying how 5-HT modulates the olfactory bulb network activity using an extracellular multi-electrode array. Utilizing a horizontal brain slice preparation, I performed extracellular recordings followingserotonin application and the use the 5-HT2 receptor antagonist, cinanserin. Using signal processing techniques, we analyzed the effects of 5-HT on multiunit activity (MUA) and local field potentials (LFP). Within the LFP we focused our analysis on two frequency bands, theta (1-10 Hz) and gamma (20-55 Hz). We found that 5-HT increased MUA and increased power in both the theta and gamma bands. These effects were shown to be 5-HT2 receptor dependent because they were not detected when slices were first perfused with cinanserin. These behavioral and physiological results demonstrate that 5-HT2 receptors are necessary for non-associative and associative odor memory and that 5-HT plays an important role in the modulation of olfactory bulb network dynamics.