Temporally Extended Practical Rationality and the Ethics of Belief 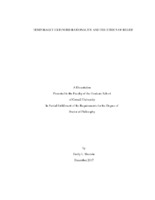 Actors may be called on to judge their reasons for action at two different points in time: once when they form an intention to act in the future and again at the time of action. At the time the actor forms her intention, her perspective is a general one, encompassing a range of possible circumstances that cannot be narrowed or fully specified in advance of action. At time of action, the actor's perspective is particularized, with more evidence available about reasons for action. This difference in perspective presents a dilemma for rational agents. In many contexts, reliable advance planning has great value. It allows for intra-personal and interpersonal coordination and minimizes bias in favor of salient or emotionally charged facts. At the time of action, additional evidence about the context of the act clarifies, or appears to clarify, current reasons for action. I describe this dilemma in two contexts: rule-following and promissory commitment. In each case there may be significant practical reasons for agents to stand by their original intentions, treating them as exclusionary reasons for action. Yet, if the agent revisits her intentions at the time of action, her reasons for action may support, or appear to support, a change in course. I begin by examining theories of practical rationality that extend rationality over time and thus permit agents to act on their initial intentions. Understood in this way, practical rationality may require agents to follow rules or honor promises without further consideration of reasons for action. I argue, however, that on a plausible understanding of epistemic rationality and epistemic responsibility to respond to evidence, acting without reflection may be epistemically irrational. If this is correct, then the dilemma of general and particular decisionmaking persists, and affects important aspects of human life. We manage only by being imperfectly irrational.