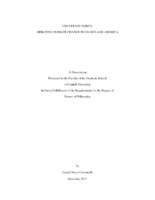 This dissertation examines a group of late nineteenth-century scientists, surveyors, foresters, and settlers interested in human-induced climate change and its implications. Uncertainty, science, and nature had many different meanings for these climate theorists. Some viewed climate and nature as mysterious but collaborative, as inscrutable allies in the project of westward expansion. Others believed that scientific and climatic unknowns necessitated a rethinking of the ideology of progress. Using the unifying themes of cultural and scientific uncertainty, this project highlights a series of tensions at the core of nineteenth-century culture: tensions between visions of environmental utopia and fears of environmental catastrophe, between positivist science and the illusory nature of scientific knowledge, between the rhetoric of development and ambivalence about the sustainability of extractive capitalism.

Craib, Raymond B.; Pritchard, Sara B.