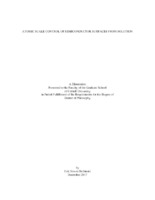 The fundamental surface chemistry of semiconductors in ambient environments is important to many applications of semiconductor materials, yet is poorly understood. Developing an understanding of how to control semiconductor surfaces using solution-based methods is critical, both as a method to rationally control surface structure, and as a means to study surface reactions at the molecular scale in the ambient conditions relevant to applications. This dissertation shows that both silicon and metal oxide semiconductors can be controlled and studied at the atomic scale using solution-based methods. In this work, scanning tunneling microscopy (STM) was used to investigate the structure of semiconductor surfaces, surface spectroscopy was used to study the chemical composition and orientation of adsorbed molecules, and computer simulations and calculations were used to verify and provide insight into experimental results. Using these methods, the solution-deposition of a nearly perfect organic monolayer of benzoate on atomically flat rutile (110) TiO2 was studied. The phenyl rings of benzoate molecules on rutile (110) were found to adopt an unexpected tetrameric structure as a result of π-π interactions, resolving a controversy surrounding the bonding geometry of benzoate molecules on this surface. In addition, the photoreactivity of TiO2 was studied using solution-deposited monolayers of benzoate and phenylphosphinate on anatase (001) and rutile (110). The photodecomposition kinetics of these monolayers in air was monitored with in-situ infrared spectroscopy, and the structures of the reacted surfaces were investigated with ex-situ STM. In all cases studied, the photoreaction kinetics followed unusual biexponential kinetics, in which the photodecomposition rate decreases by approximately two orders of magnitude after a fraction (typically ~25%) of the molecules have reacted. This trend in reactivity is proposed to result from changes in the magnitude of band bending at the surface. Lastly, two solution-based methods for the functionalization of Si (111) surfaces were investigated with STM, surface spectroscopy, and kinetic Monte Carlo simulations. It was found that a methoxylation process unexpectedly etches the silicon surface, and a new direct method for the fluorination of Si (111) using HF(aq) was discovered.