Small Worlds after All? Landscape and Community Interaction in the Cycladic Bronze Age 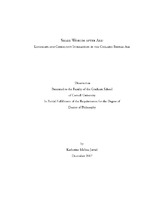 Archaeologists have considered the Cycladic islands (Greece) during the Early Bronze Age (ca. 3100-2200 BCE) to be a "false start" on the path to the emergence of civilization in the Aegean (Broodbank 2000; Tartaron 2008). While recent scholarship has reevaluated social development in the Minoan and Mycenaean archaic states, several contradictions characterize the current state of Early Cycladic (EC) scholarship. In this dissertation, I use small worlds analysis—a bottom-up approach that examines habitual interaction between the communities that comprise small world networks (Tartaron 2008; 2013)—to reconsider the nature of EC intercommunity interaction. By combining a small worlds approach with GIS settlement and landscape analyses, I address the following questions: what impact did subsistence strategies have on social organization, to what degree were EC communities reliant on one another, and what was the role of maritime travel in maintaining small world connections? Analysis of archaeobotanical and zooarchaeological evidence shows that EC islanders employed a variety of subsistence strategies to minimize risk, diversifying production spatially and temporally rather than relying on the production of surplus (contra Renfrew 1972). Site catchment analysis reveals that available agricultural land could support a much larger population than is typically estimated for this time period, emphasizing the viability of spatial diversification. EC communities likely cooperated in agricultural production to ensure mutual survival (cf. Halstead 1981, 1986). While analysis of EC fortifications shows that warfare might have been a regular feature of island life, social nearness and community interdependence for subsistence meant that conflict was probably short-lived and minimally damaging. The fragmented Cycladic landscape meant that communities located in peripheral locations—such as one small world in southeastern Naxos—enjoyed long-lived and stable connections. Finally, GIS analysis of small world maritime travel, combined with analysis of the agricultural production cycle, reveals that there was no "sailing season" for undertaking long-range maritime travel during the EC period. Rather, short-range journeys might have been undertaken opportunistically throughout the year. Long-range voyages were necessary for larger, more isolated communities that could not maintain habitual maritime connections with other communities, and voyages at the regional scale likely occurred only infrequently.