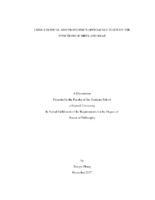 Sir2 (silencing information regulator 2) family of enzymes (or sirtuins) are nicotinamide adenine dinucleotide (NAD+)-dependent protein lysine deacylases and play a variety of roles in biological systems. SIRT6 is one of the seven mammalian sirtuins and has diverse biological functions such as maintaining genomic stability, controlling glucose homeostasis and suppressing tumor growth. Enzymatically, SIRT6 has been shown to have lysine deacetylation, lysine defatty-acylation and mono-adenosine diphosphate (ADP)-ribosyltransferase activities. However, the contribution of each activity to the various functions of SIRT6 is poorly understood. In Chapter 2, I describe the dissection of functional contribution of the defatty-acylase activity of SIRT6 by utilizing a SIRT6 mutant (Gly60Ala), which has efficient defatty-acylase activity but no detectable deacetylase and mono-ADP-ribosyltransferase activities. Using this mutant, I found that SIRT6’s defatty-acylase activity regulates the secretion of numerous proteins in mouse embryonic fibroblasts. Interestingly, SIRT6 defatty-acylase activity regulates the sorting of many ribosomal proteins into exosomes for secretion. In Chapter 3, I found that SIRT6 defatty-acylase activity contributes to its tumor suppressor function. To identify SIRT6 defatty-acylation targets, I utilized a fatty acid reporter to metabolically label the proteome followed by affinity enrichment and mass spectrometry analysis. I found that R-Ras2 is a SIRT6 defatty-acylation target that accounts for its tumor suppressor function. Mechanistically, lysine fatty-acylation of R-Ras2 promotes its plasma membrane localization and increases its interaction with PI3K. The increase in R-Ras2 and PI3K association leads to elevated Akt activation and increased cell proliferation. In Chapter 4, I describe an interactome study of KRas4a and KRas4b, which led to the identification of many previously unknown KRas4a and KRas4b interacting proteins. Interestingly, I found that KRas4a interacts more with Raf1 than KRas4b does, which may contribute to the more anchorage-independent colony formation in KRas4a transformed NIH 3T3 cells than in KRas4b transformed NIH 3T3 cells. Moreover, mTOR was identified as a KRas4a/b interaction protein. Different from well-established mTORC1 and mTORC2, KRas4a/b forms a new mTOR complex without raptor or rictor in cells.