SYSTEMATICS, MODE OF SPECIATION, AND MODELS OF PHYLETIC CHANGE IN PALEOGENE-EOCENE †ATHLETA (VOLUTOSPINA) FROM THE U.S. GULF COASTAL PLAIN, HAMPSHIRE BASIN OF ENGLAND, AND PARIS BASIN OF FRANCE 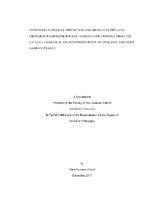 In this study I document speciation modes across a clade of 23 Paleocene-Eocene †Athleta (Volutospina) gastropods, and phyletic models of evolution exhibited by five lineages. I first review the alpha taxonomy of †Athleta (Volutospina), abundant on either coast of the North Atlantic ocean, and present revised descriptions of 23 species. Cladistic analyses provided a phylogenetic context for subsequent analyses. Two modes of speciation (anagenesis and punctuated equilibrium) are identified in the phylogeny. There was evidence for both modes but punctuated equilibrium was more prevalent than anagenesis within this clade. In order to document evolution within species, I performed geometric morphometric analyses on five lineages included in the phylogeny. Three evolutionary models were compared on equal footing using the Akaike Information Criterion (AIC). Within this likelihood-based framework, I analyzed landmark-based data for four species, and reanalyzed one well-known putative case of gradualism in the †A. (V.) petrosus lineage from Eocene deposits of the U.S. Gulf Coastal Plain. These analyses support previous interpretations about evolutionary changes in †A. (V.) petrosus, and confirm the directional nature of shell shape evolution. The four other species analyzed showed unbiased random walks to be most prevalent, for both overall shape (in Procrustes residuals) as well as the first three principle component axes. Lastly, larval modes (planktotrophic or non-planktotrophic) were identified for each species and evolutionary trends associated with modes of development, when considered in a phylogenetic context, portray a biogeographic story of the clade. The correlation between mode of development, geographic range, and species duration were examined. Test results confirm the hypotheses that species with planktotrophic larvae exhibit longer durations and the correlation between large geographic range and long species duration but do not concur with the hypothesis that species with planktotrophic larvae show wider geographic ranges.