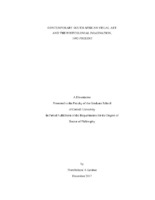 This study examines themes of history, humanness, cultural appropriation and identity politics, as engaged by selected contemporary South African artists and scholars in the 1990s and 2000s. During this period visual artists produced artworks and scholars posited arguments characteristic of postcolonial imagination whose contemporary qualities demonstrated a shift away from the culture of resistance to that of innovative expressions and expanded subject matter. There also emerged contentions that evidenced the complexity of the transition from apartheid to democracy. Working with local discourses (by Njabulo Ndebele and Albie Sachs) preoccupied with a liberated imagination from the stranglehold of apartheid as well as global postcolonial theories (of C.L.R. James, Frantz Fanon, Edward Said, Gayatri Spivak and Homi Bhabha) on the aforementioned themes, this study presents six chapters. The introductory chapter maps out a theoretical framework and contextual background of the study and articulates the meaning of postcolonial imaginary. Chapter 1 reads Johannes Phokela’s oil paintings as a postcolonial critique of (art) history’s Eurocentrism and his visual rewriting of such history by inserting black subjects into colonial master narratives from which they were omitted, obliterated and misrepresented. Chapter 2 examines Zwelethu Mthethwa’s color photographs through which he proclaims to restore the dignity of black subjects surviving in the margins of postcolonial modernity. Chapter 3 is a critique of Peet Pienaar’s performance artwork which appropriates a Xhosa male initiation ritual and subjects a black female medical doctor to circumcise him in an art gallery. Chapter 4 reflects on Liese van der Watt’s call for post-identity, post-race and post-black. The concluding chapter reads the work of Phokela, Mthethwa, Pienaar and van der Watt in light of postcolonial desires: yearning and searching for something different from that which colonial apartheid has constructed and imposed on the South African imagination.