INVESTIGATIONS INTO HOW BACTERIA INFLUENCE NUTRIENT AVAILABILITY IN THEIR ENVIRONMENT 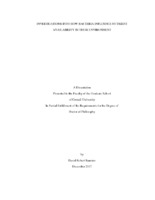 Bacteria shape many of their interactions with other organisms through the manipulation of nutrient availability, whether through cooperation by providing nutrients, or through competition for nutrients. Thiamin is an essential vitamin necessary for all life, however, how bacteria shape the ecological interactions between organisms for this nutrient is not well understood. We employed a Drosophila melanogaster-microbiota model utilizing a chemically defined diet to understand the interaction between how the host is influenced by the microbiota’s interaction with the dietary component thiamin. We found that the Drosophila melanogaster microbiota provisions thiamin to its host in a low thiamin environment. This provision rescued development of Drosophila on a no thiamin diet, as axenic flies were unable to develop on this diet. Our study was a clear demonstration supporting the long standing hypothesis that animal microbiotas function to provision thiamin and other vitamins to their host. A small subset of bacteria produce the enzyme thiaminase I, which degrades thiamin to its two moieties. The biological function of this enzyme is not understood. We used a genomic approach to investigate a potential function of this enzyme and found that it is located in a conserved operon in three thiaminase I producing Paenibacillus species, with other genes involved in thiamin salvage and production of the thiamin antimetabolite bacimethrin, suggesting it may play a role in thiamin salvage and competition for this nutrient. We further investigated the biological role of thiaminase I using Burkholderia thailandensis, where we generated thiamin auxotrophs. We found that the enzyme plays a role in thiamin salvage as it allows for auxotrophic strains to grow in media conditions when strains lacking thiaminase I cannot, as it recycles precursors from thiamin and certain analogs. Using a genomic approach, we also investigated the biosynthetic and metabolic potential of the unique, giant bacterial intestinal symbiont ‘Candidatus Epulopiscium viviparous’ of the surgeonfish Naso tonganus. We found that this bacterium’s genome is enriched for carbohydrate metabolism, as it has the potential to degrade a vast array of carbohydrates present in its host’s diet, allowing them to supply assimilable nutrients, vitamins, and protein to their host.