Concepts and Structures in Programming Languages 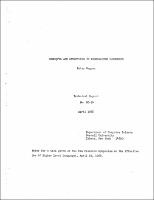