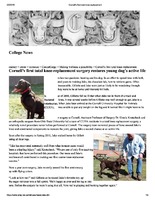 This news item is about: James Gillette has two passions: hunting and his dog. In an effort to spend time with both, he has dedicated years to training Jake, his chocolate lab, how to retrieve game. Often described as inseparable, Gillette and Jake were just as likely to be wandering through wetlands as they were to be at home until travesty hit both. In the summer of 2010, Gillette fell so ill that when Jake ran in front of a truck and fractured his knee, it was several weeks before Gillette was well enough to get Jake to a veterinarian. When Jake later arrived at the Cornell University Hospital for Animals (CUHA), he was unable to put any weight on the leg and it looked like it might have to be amputated.