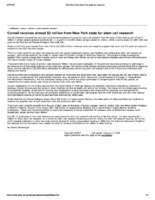 This news item is about: Cornell University received two one-year institutional development grants for stem cell research from the state of New York as part of $14.5 million in similar awards granted statewide Jan. 7. A grant to Cornell's Ithaca campus totaled $1 million, while a second award for $997,382 was given to the Weill Cornell Medical College in New York City. These are the first grant awards from New York's new $600 million, multiyear stem cell research program that came out of a stem cell research initiative in the 2007-08 state budget.