Integration and Equilibrium of Maize Markets in Southern Africa: A SADC Sub-regional Assessment 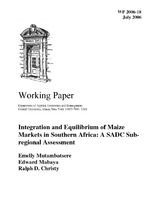 This paper investigates the spatial integration and efficiency between five central markets in southern Africa. The study uses data on commodity prices, trade flows, and transfer costs from central maize markets in Botswana, Malawi, and South Africa, and two in Mozambique, analyzed using the Parity Bounds Model, the Barrett-Li Model and some level 1 and non-parametric assessments. The study seeks to (1) evaluate the nature of price and trade relations, (2) establish the level of regional spatial integration, and (3) evaluate the level of efficiency in these markets. Results from the analysis indicate various forms of integration and efficiency outcomes for the sample markets. The central markets in South Africa and Botswana are characterized by significant levels of perfect integration, with higher frequency of imperfect integration with positive returns observed on the South Africa to Botswana trade route, and some occurrence of imperfect integration with negative returns observed in the opposite trade direction. For South Africa and Mozambique, trade is bidirectional and discontinuous, with very low frequency of perfect integration. Trade between South Africa and Mozambique’s Southern region generally fails to exhaust arbitrage profits, and though integrated, the market pair appears largely inefficient. South Africa and Malawi follow similar trends, although in this case perfect integration holds with higher frequency, and imperfect integration with negative return is occasionally observed from trade in the Malawi to South Africa trade route. Malawi and Mozambique’s Northern region exhibit perfect integration of a relatively high frequency, although imperfect integration with positive returns appears dominant on the Mozambique to Malawi route. Trade is bidirectional and discontinuous, predominantly in the Mozambique to Malawi direction. The market interactions between Botswana and Mozambique’s Southern region or Malawi follow a related trend exhibiting market segmentation as evidenced by the lack of trade. Efficiency holds with a fairly high frequency mostly in the form of segmented equilibrium, although significant segmented disequilibrium on the Botswana to Mozambique/Malawi route is also observed. Overall, the southern Africa maize markets considered in the sample seem to exhibit significant frequency of market integration, indicating tradability commodities and contestability of markets. Efficiency holds less frequently, although non-trivially, we observe that for those markets characterized by near continuous trade returns to arbitrage are exhausted for about 25% of the time. Often however, when trade is observed, efficiency appears to be weakened by insufficient arbitrage, possibly a result of non-cost barriers to trade (infrastructural or regulatory), imperfect information, or supply side constraints. For these markets, positive trade is also occasionally observed when arbitrage returns are negative, possibly due to contracting lags, and exchange rate fluctuations. Where trade is not observed, efficiency appears to hold with a slightly higher frequency (up to 45%), so that the lack of trade is often justified by the lack of positive arbitrage returns. Significant segmented equilibrium also seems to characterize these markets, where again the lack of trade is consistent with expected arbitrage returns. For these markets, efficiency is also occasionally compromised by insufficient arbitrage, whereby trade sometime fails to occur even when the returns to arbitrage incentives appear favorable (segmented disequilibrium). Therefore in order of frequency, we observe a high frequency of imperfect integration (regimes 3) and segmented equilibrium (regime 6), a fairly regular occurrence of perfect integration (regimes 1 and 2), and irregular occurrence of segmented disequilibrium (regimes 4) and the negative returns type of imperfect integration (regime 5). In specific markets, import prices consistently exceed domestic market prices, an inefficient outcome that appears to result from the involvement of the state in grain trade, where market conduct often is driven by non-profit objectives. These results suggest a need for policy intervention in the areas of improved productivity and access to information to takes advantage of unexploited arbitrage opportunities, and in the longer term, dealing with structural barriers to trade that prevent market entry especially where positive returns are currently observed. In some cases though, the lack of trade is an efficient outcome that probably requires no immediate policy interventions.