Disentangling the Consequences of Direct Payment Schemes in Agriculture on Fixed Costs, Exit Decisions and Output 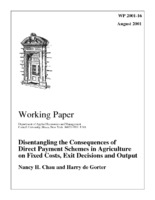 This paper goes beyond orthodox considerations of direct payment effects on agricultural output, by highlighting the role of subsidies in affecting individual producers' ability to cover fixed costs, and in distorting the volume of aggregate production and net trade by implicitly discouraging exits. The theoretical model considers both taxpayer and consumer financed decoupled direct payment schemes and compares them to a coupled production subsidy. In terms of possible producer responses to direct payments, we propose an analytical framework of production decision-making in the presence of a stochastic distribution of fixed costs across representative farms. We show that decoupled payments in theory can have a larger effect on output than coupled payments. The model explicitly recognizes three consequences of domestic support: (a) induce exit or entry; (b) bias production incentives to domestic markets; and (c) cross-subsidize export in global markets. An empirical model of the U.S. wheat sector is developed to illustrate the relative potential impacts of coupled versus decoupled payments on output through the effects on a farmer's ability to cover fixed costs and hence exit decisions.