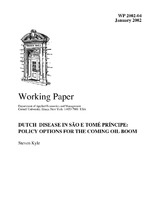 This paper discusses the policy issues facing the country of São Tomé e Príncipe, a small island country in the Gulf of Guinea, given the discovery and imminent exploitation of large reserves of oil in its territorial waters. While presenting huge opportunities, the history of other African oil-exporting countries demonstrates that there are dangers as well. An appropriate policy for macro balance and for disposal of oil revenues will be essential if São Tomé e Príncipe is to avoid the economic pitfalls which have plagued countries such as Nigeria or Angola. The two main lessons of macroeconomics in such a situation is first not to generate revenue faster than it can be productively used and second to invest in such a manner that the country’s underlying comparative advantages are preserved. This is based on the premise that since the oil reserves are finite, the oil boom is not permanent and the country will in the foreseeable future be forced to fall back upon non-oil export sectors. In the case of São Tomé e Príncipe, history and recent analyses confirm that there is a strong comparative advantage in agriculture, implying that investments which enhance productivity and efficiency in this sector would be appropriate for expenditure of oil revenues. In addition, such a strategy would have beneficial effects in terms of poverty alleviation and equitable distribution of benefits from the coming windfall.